The history of Far Horizons dates back to 1937 or 1938 when Mr. Gladden V. Hull (G.V.) met Captain Martin Burckes who helped G.V. and his wife, Mary, in their study of Theosophy. G.V. and Mary Hull subsequently moved to California in 1947, settling in Reedley, a small town located near the foothills of the Sierra Nevada mountains not far from the Kings Canyon National Park and Sequoia National Forest. As a teacher, G.V. had the summers free and helped in the repair and building of cabins that had been damaged by snow. He started doing repair word in 1947; first with the cabins at Huntington Lake, later at Hume Lake.

In the Spring of 1954, the idea of a Theosophical camp was discussed at a Federation meeting of the Northern and Southern California Branches of the Theosophical Society in America. It had long been a dream of Mary and G.V. Hull that such a camp be made available to Theosophists. When G.V. made inquiries about non-profit organizations building camps in the Sierras, Ranger Spivey of Hume Lake, who was acquainted with G.V’s work, replied that five square miles had been set aside for organization camps and he offered to show Mary and G.V. the area Since water is very important, Ranger Spivey took him to an established spring that had been used by loggers in the area, an area the Ranger said would be his choice for a camp. Ruth, G.V. and Mary’s daughter, writes:

Ranger Spivey asked where they wanted the acreage, in the meadow or higher ground. The higher ground was selected. At first, they were only going to take on hill; but added the second hill for expansion. The Forestry Service then surveyed the property, with some ten acres under lease.

Far Horizons was then organized, both on paper and on the land itself. Work began immediately on the water system and the camp grounds.. The summer of 1954 was a busy one. G.V. and Mary Hull and Marin, Esther and Melvin Burckes and others formed the permanent nucleus of the Camp, while of theosophists contributed their energy and skills to the effort as they were able. These hardy souls lived in tents for the first five weeks, cooking on large wood-burning range out in the open and bathing in the creek. A large concrete tank was built to hold water before pumping it to the site of the camp.

Several names were submitted for incorporation purposes by Dolly Lee Butler, an attorney and one of the camp founders, and the Camp’s non-profit status was granted October 21, 1954 (see footnote below). The name the State ultimately selected was “Far Horizons”.

In the summer of 1955, new logging roads had been cut and a new and better water supply discovered. G.V. and others built another concrete holding tank and put in the first building, kitchen and bath house. Herbert Harrison of Los Angeles made a loan to permit Far Horizons to have a “gravity fed” water source. During this time, the kitchen-utility building was constructed from member donations and set up so that individual campers could do their own cooking. The Fresno Lodge and members from other T.S. groups came to help out, living as campers in tent “houses,” which G.V. had made of collapsible wooden walls and canvas tops. They were offered as temporary housing for a small fee and lasted 30 years, to be eventually replaced by Pine Hill Lodge in August of 1987.

One of the conditions of the lease with the Forest Service was that the Camp show $25,000 in improvements within five years or lose the lease. To meet this condition, many Theosophists financed the construction of cabins that would be available for their use while at camp and rented to other attendees when owners were not there. G.V. was the primary builder, with volunteer help, of all buildings constructed from 1955 to 1966, when his health deteriorated and past away on March 30, 1967.

Since its inception, Far Horizons has had a vigorous and on-going construction program. The last building constructed was Pine Hill Lodge. A part of the Far Horizons master plan, it was completed in 1987. This latest addition was actually built by professionals who had attended Far Horizons in their youth and volunteer their services out of love for the camp. Pine Hill has eight guest rooms and two middle storage rooms. Also, at about this time, a much needed living area was added to the Director’s cabin by Ed Wylie and family. All structures on the camp grounds were built to exceed building code requirements to enable them to withstand winter conditions.

Written by Bim and Melvin Burckes 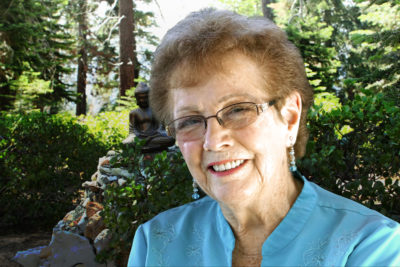 Ruth (Hull) Laemmlen is the daughter of Mary and G.V. Hull who dreamed up and built most of the buildings at Far Horizons Camp. She is a retired school teacher, and full time supporter of Far Horizons, being the Historian for Camp since 1979. She has preserved the history in the form of photo albums, taking most of the photographs. Please take a few minutes to look at some of the many albums at Camp.